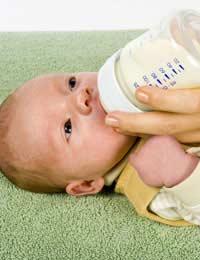 We all seem to know that breast milk is best for babies, particularly during the first six months of life. But recent research shows that in the United Kingdom, only three percent of women breastfeed exclusively for those precious first six months of a baby's life. In the United States, the number is better at eleven percent but far from being a majority in either country.

Campaigns to increase these figures have been ongoing for years but with little success. It seems that a sensible approach should be to make infant formula as healthy, nutritious – and successful in terms of the baby's health – as possible.

Today, GM technology is such that researchers believe it could be reasonable to assume we have the capability for producing proteins similar to human milk but instead, adding them to infant formula.

The problem is that trying to 'copy' human breast milk is a formidable task that some believe just isn't possible. If you think about all the healthy, important fats, proteins and vitamins that can be found in breast milk, that alone is a difficult task for copying.

However, breast milk also has special antibodies and hormones that are so crucial for a baby's development and health. The living bacteria in breast milk play an important role in the health of a baby's gut as well.

To date though, there are two proteins that have become the first to be around the corner from commercialisation. Lactoferrin and lysozyme are manufactured in GM rice and have shown promising results as part of an oral rehydration product used to treat diarrhoea in developing nations.

There may be potential for these products to be used in infant formula but the problem is that they would have to be labelled. Given the widespread mistrust of GM products, it is doubtful that the UK public would be keen to purchase infant formula that contains GM ingredients, even if those ingredients were proven to show benefit and mimic some of the components of breast milk.

In short, it's an area that most companies would probably rather not venture, despite the enormous potential to improve infant formula. It may be that if attitudes in Europe and the UK begin to change, the formula could be successful.

Alternately, people in the US don't share the same intense anti-GM sentiment that saturates the UK and Europe, so this kind of product may fare well in North America. If studies performed over time can then show a direct benefit from the GM formula, this may more easily persuade UK mothers to purchase the product.

Statistically, it's quite clear that babies fed with formula milk lose out on a lot of the important benefits of breast milk. They are more susceptible to infections and don't have the same robust immune systems. Any infant formula that can mimic these proteins could potentially make an enormous difference in the health of babies everywhere.

Still, the campaigns encouraging mothers to breastfeed should continue – perhaps being redesigned for greater success. At the same time, all efforts should be made to improve infant formula and give babies the best chance of a healthy life.