Home > Other Issues in GM Foods > How do They Test GM Foods? 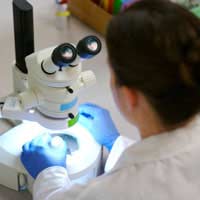 Testing genetically modified (GM) foods can seem to be a sloppy science to many people, primarily because it is challenging to determine the long-term effects of this still relatively new technology that has emerged over the last several decades.

However, the potential risks to human health, the environment and animals have prompted calls for increased testing of GM foods. Also, many people want to know if the foods they consume contain GM ingredients. In this sense, testing is an important part of labelling.

One type of testing for GM foods is used to assess any unwanted effects when a gene is inserted into another organism. There are concerns that the inserted gene will 'mingle' with the genes present in the organism, which could affect the entire functioning of the plant. The potential for this to affect our health is a real possibility that has to be assessed and considered before a GM food is approved.

To make this assessment, there are a number of tests that can be done. One is to look at the chemical makeup of the GM crop and another is to conduct animal feeding trials. In terms of analysing the makeup of the plant, scientists can assess the nutrients in the food as well as the amount of toxins that would typically be found in the foods.

If the GM food is shown to be toxic beyond an acceptable level of the substance of concern, then it would not be approved. If there are any other results that are a potential cause for concern, then these would be investigated in greater detail.

To look at the GM crop in a feeding trial, researchers will feed animals – often using rats or a similar animal – the GM food for a specified length of time. If the animal shows any problems such as ones relating to immunity, then these would be investigated and it is unlikely that the GM product would be authorised for use.

Although testing GM foods is important for determining if a food is safe and reasonable to provide to the public, there are still many concerns that the technology is an unpredictable one that can't accurately be gauged by current testing methods.

Also worrying are long-term effects that testing simply can't sufficiently assess at this time. However, it is still necessary to use the means we have available for testing, with the hope that any potential issues in a GM food are identified early rather than later. This approach will mean that we minimise the risks as best we can while hopefully developing better ways of testing to ensure the safety of GM foods.

Labelling and Pricing GM Foods
Share Your Story, Join the Discussion or Seek Advice..
During the last few weeks I have asked several people who work in restaurants and grocery stores to tell me if the corn they sell is genetically modified.Most of those employees simple said 'Eh?' and on several places I asked the same question to more than one employee or supervisor. This means NO ONE is trained or could care less. This is rather sad. In fact, a supposedly upscale grocery store has signs all over the place stating 'all natural'.And so when I read the package ingredients to them I asked them a simple question: 'Your signs imply that everything you sell is 'all natural'. In fact, your own private label shows Genetically modified ingredients therefore how could you state the product is all natural? The crew supervisor said: 'Are you with FDA?' whereupon I answered him: 'No, but I represent something worse' and I left the store empty handed and vowed not to return there for anything! Alfredo
wise owl - 11-Apr-13 @ 10:18 PM
Title:
(never shown)
Firstname:
(never shown)
Surname:
(never shown)
Email:
(never shown)
Nickname:
(shown)
Comment:
Validate: